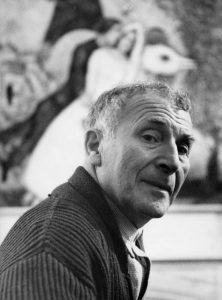 Marc Chagall (1887–1985) was a Russian-born painter, printmaker and designer, now acknowledged as one of the great figurative artists of the twentieth century.

His art has been exhibited in galleries and museums across the world, including the Louvre and Petit Palais in Paris, the Museum of Modern Art in New York and the Art Institute of Chicago. Today, his works are held in the Tate Gallery in London, the Tel Aviv Museum of Art and the Albertina in Vienna, among others.

Marc Chagall was born in Vitebsk, Russia (now Belarus) to a Hasidic Jewish family. Immersed in Jewish culture and iconography at an early age, Judaic traditions and folklore show in his art. After studying in St. Petersburg, where he was already starting to define his distinctive style, he moved to Paris in 1910, to a city that features as a repeated motif throughout his life. He moved into a studio within a settlement for bohemian artists known as La Ruche (“the Beehive”). There, he met other notable artists such as Apollinaire, Delaunay, Leger, Modigliani and Lhote, encountered art movements including Fauvism and Cubism.

Under the influence of these new acquaintances, and the Impressionist, Post-Impressionist, and Fauvist pictures he saw in Paris museums and galleries, he developed his unique style.While he was actively engaged in the Parisian artistic community, Chagall considered art to be a means of personal expression, and preferred to be considered apart from other artists. Nevertheless, Chagall’s dreamlike subject matter, produced in rich colours and a fluent, painterly style, has been described as a hybrid of Cubism, Expressionism, Abstraction, Fauvism and Symbolism. In turn, his supernatural subjects are believed to have significantly influenced the Surrealists.

These visual metaphors, based on emotional and poetic associations rather than logic, helped to make him one of the most popular major innovators of the 20th-century School of Paris.Marc Chagall’s art featured in a successful solo show in Berlin in 1914, but when visiting Russia during the same year, the artist was prevented from returning to Paris until 1926, due to the outbreak of World War I.

Chagall was initially enthusiastic about the Russian Revolution, and was made commissar for art in the Vitebsk region. However, after several years of arguments with the faculty of the art academy, he moved to Moscow, where he turned his attention to the stage, painting murals for Granovsky’s Jewish Theatre in Moscow and producing sets and costumes. However, it was clear he would not have the freedom to develop his art under the political conditions of Marxist socialism, and he left Moscow once again in 1922. Chagall spent the next two decades in Europe, primarily in Paris, before fleeing to the US in the onset of World War II. He eventually returned to France in 1948, and stayed there until his death.

Just as his prolific career followed him across Europe and the US, Chagall’s experiences influenced his work. Hitler’s rise to power and the death of his wife Bella both became recurring pictorial motifs in his work, showing the impact of national and personal tragedies.

Marc Chagall had a long and prolific career, completing many large public projects in various forms. In addition to painting, Chagall was also noted for his work in stained glass, book illustrations and theatre design. In the 1950s, he expanded these artistic mediums further to include ceramics, stone sculpture, mosaics and tapestries.

In 1923, Chagall began his career as a printmaker when Paris art dealer and publisher Ambroise Vollard commissioned a series of etchings to illustrate Nikolay Gogol’s novel Dead Souls. He went on to produce an edition of French poet Jean de La Fontaine’s Fables, a series of etchings illustrating the Bible, and several smaller collections of engravings, single plates, coloured lithographs and monotypes.

Chagall then mastered the art of stained glass in the late 1950s. In fact, his stained glass windows are commonly considered to be some of the strongest work produced towards the end of his career; the medium’s brilliant colours perfectly suited to his magical imagery. Public commissions included stained glass windows for the Hadassah Synagogue near Jerusalem, the United Nations and several cathedrals in Europe. He also worked on various sets for plays and ballets outside of Russia, completing a number of projects for the Paris Opera and the New York Metropolitan Opera.