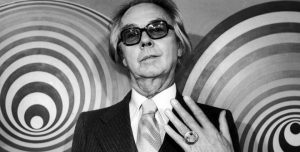 Considered the founder of Op Art, Victor Vasarely was born on April 9th, 1908 in Pécs, Hungary. Recognized as one of the most important artists of the 20th century, his experiments in optical illusions have had a strong influence on several modern artists.

In 1925, Vasarely attended University of Budapest’s School of Medicine for 2 years. After deciding that he wanted to pursue art, Vasarely began studying traditional academic painting at the Podolini Volkmann Academy. However, he soon became unsatisfied with academic painting and enrolled in the Bauhaus Academy in 1929. Here, he created paintings based on geometric forms such as the cube, rectangle and the circle. For the next thirteen years, he devoted himself to graphic studies. The works during 1930-1944 tend to be figurative and graphic. For Vasarely, this laid the foundation for his Zebres (Zebras), 1937 series. The initial work of this set, titled Zebra, is one of the earliest examples of optical art. His op-art paintings are distinguishable by their hypnotizing colours and distorted surfaces. The repetition of geometric form is heavily used as well. Around 1947, Vasarely discovered his place in abstract art. He believed that form and colour were inseparable. “Every form is a base for colour, every colour is the attribute of a form.” Abstracting forms from nature then became part of his specific artistic technique.

Vasarely ventured into sculptures later in his career. Sculpture presented an exciting possibility of creating an even more dynamic optical experience. After experimenting with mixed media, it is no surprise Vasarely ventured onto this new medium. For his sculptures, he used lucite and glass to enhance his images. Additionally, he also created stacked figures with geometric designs and merged them onto a shaped canvas, combining his painting and sculpture.

Today, Victor Vasarely prints, paintings, collages and sculptures are highly regarded in exhibits around the world. The work created throughout his career has had a significant influence on other artists. Furthermore, when he died 15th March 1997 he was the “grandfather” of an art movement that would last until the present day.