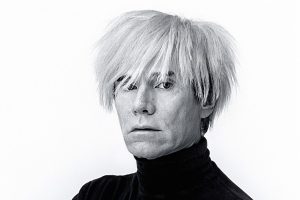 Andy Warhol, or Andrew Warhola as he was born, is one of the most influential artists of the contemporary art period. After the A at the end of his surname was mistakingly dropped by Glamour Magazine, he became Andy Warhol. He worked as an illustrator for the magazine for several years and by 1955 he was the most successful commercial artist in New York. In 1960 he produced the first of his paintings depicting enlarged comic strip images. Warhol then became the founder of the Pop Art movement, shaping the genre and making it what we know it as today.

Warhol pioneered a medium where an enlarged photographic image is transferred to a silk-screen that is then placed on a canvas and inked from the back. Each Warhol silkscreen used this technique and it enabled him to produce a series of repetitive, mass-media images. These iconic Andy Warhol prints, incorporating such items as Campbell’s Soup cans, can be taken as comments on consumerism and the severity of American society. Warhol’s best- known silk screen prints include his iconic portfolio of Marilyn Monroe. Producing art in this way, similar to an assembly line, Warhol gave rise to series, of his beloved celebrities. Even today, these massively recognizable images serve as a beacon of popular culture.

In 1962, Warhol Famously set up a creative studio which went by the name of “The Factory”. It was a space where he and several other creatives would work, film, party, and experiment with different creative processes. In 1967, Warhol relocated to the Decker Builder which is where he was famously shot by Valerie Solanas, a disgruntled film star and writer. Solanas claimed the reason why she shot him was, “he had too much control over my life.” Despite the severity of the shooting, Warhol survived but lived the rest of his life in fear of being shot again. The security at The Factory tightened and his injuries meant he spent most days in pain. Warhol then died at 6:31 A.M. on Sunday, February 22nd, 1987, at the New York Hospital following complications after a gallbladder operation. Despite not knowing the exact date that Warhol was born, there is absolutely no doubt that we know when he died.