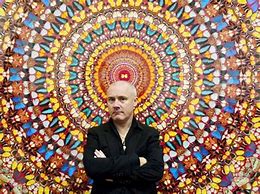 Damien Hirst was born in Bristol in 1965 and grew up in Leeds. In the 1980’s he moved to London and worked in construction before studying fine art at Goldsmiths College. Hirst became a major contemporary art figurehead after organizing an exhibition in an abandoned warehouse for himself and his classmates. This pivotal show he named, “Freeze”, was something that would define the young artist’s career, and it ultimately led to him winning the Turner Prize in 1995. Hirst then went on to become one of the most influential artists of the contemporary art period and his generation

Hirst’s artistic method was to experiment in different mediums such as sculpture, painting, and drawing. This helped him explore the complicated relationship between art, life, and death. As well as this, his work delved into the meaning of human existence, challenging modern-day society, and belief systems.  Hirst forces the viewer to confront morbid and uncomfortable topics that are often ignored or avoided. Some of his most groundbreaking works include The Physical Impossibility of Death in the Mind of Someone Living (1991), a shark in formaldehyde; Mother and Child Divided (1993) a four-part sculpture of a bisected cow and calf; and For the Love of God (2007), a human skull studded with 8,601 diamonds. In addition to his installations and sculptures, Hirst’s Spot paintings and Butterfly paintings have become universally recognized.

Since his first year at Goldsmiths, Hirst has held over 80 solo exhibitions and his work has been included in at least 260 group shows. In 2012 his career reached new heights when he was recognized at the Tate Modern with a major exhibition.