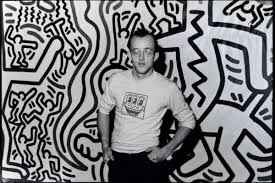 Keith Haring was born on 4th May, 1958 and raised in Pennsylvania, US. In 1978 Haring moved to New York City and enrolled in the School of Visual Arts. Here, Haring became involved with an art movement that started outside gallery and museum spaces, in the downtown streets, subways, and clubs. He became friends with fellow artists, as well as musicians and performers who were all part of a growing art community. Within the community, he began to organise exhibitions and performances at Club 57 and other alternative venues.

In 1980, Haring found an effective medium that meant he could communicate with a wider audience. He noticed the unused advertising panels in subway stations and he started to draw in white chalk on these panels. Haring became known for producing public drawings in rapid rhythmic lines, sometimes creating as many as forty drawings in one day. This seamless flow of images became familiar to New York commuters, who would engage with the artist whilst he was at work. The subway became a working ground for trying out new ideas and techniques.

Haring devoted much of his career to creating public works, which often carried social messages. He produced more than 50 public artworks between 1982 and 1989, in many cities around the world. Some of his most famous works include, Crack is Wack, 1986, mural created for the 100th anniversary of the Statue of Liberty in 1986, and a mural painted on the western side of the Berlin Wall. Haring also held drawing workshops for children in schools and museums around the world, and produced imagery for many literacy programs and other public service campaigns.

In April 1986, Haring opened the Pop Shop. This was a store in Soho selling T-shirts, toys, posters, buttons, and magnets bearing his iconic images. Haring considered the shop to be an extension of his work and painted inside an abstract black on white mural, creating a striking shopping experience. The shop intended to allow people greater access to his work, which was now available at a low cost. The shop received criticism from art critics and other artists, but Haring remained committed to make his artwork available to as many as possible. He received strong support for his project from friends, fans, and mentors including Andy Warhol.

Keith Haring died of AIDS related complications at the age of 31 on 16th February, 1990. A memorial service took place on 4th May, 1990 at the Cathedral of St. John the Divine in New York City, with over 1,000 people in attendance. The work of Keith Haring lives on in the exhibitions and collections of major museums around the world.