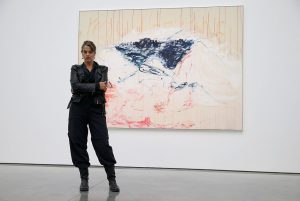 Tracey Emin was born in London in 1963, and today she lives and works in London and France. Her work takes many different forms of expression, including needlework, sculpture, photography, drawing, painting, video, and installation. Tracey Emin came to prominence as one of the loose grouping of contemporary artists popularly referred to as YBAs (Young British Artists). This group of artists, also including Damien Hirst, Sarah Lucas and Angus Fairhurst, often exhibited together and collaborated. Emin’s work is uninhibited in the way it absorbs and reflects her personal life- whether in seminal installations such as Everyone I Have Slept With 1963-1995 and My Bed, her early performances and videos such as Why I Never Became a Dancer, or her writings (which include a memoir, Strangeland, and a period as a newspaper columnist). Emin has always been inspired by expressionist painters Edvard Munch and Egon Schiele (evident in her Diploma Work Trying to Find You), although her work is also explicitly feminist. Viewing her work generates an experience of intimacy as a result of Emin’s emotional honesty in reflecting on meaningful moments from her life. After presenting Madonna with the UK Music Hall of Fame award in 2004, and vacationing at the music icon’s country estate in Ashcombe, Madonna described Emin as “intelligent and wounded and not afraid to expose herself. She is provocative but she has something to say”. In 2013, Queen Elizabeth II appointed Emin Commander of the Most Excellent Order of the British Empire for her contributions to the visual arts. She continues to create works that both challenge and provide solace to her viewers.