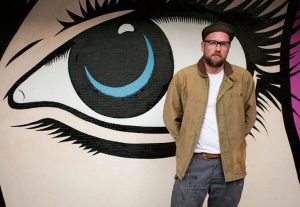 Born Dean Stockton in 1978 in London, England, he worked in advertising and for publications like Thrasher magazine before embarking on his own artistic career Drawing inspiration from New York’s pioneering graffiti scene of the 1970s and ’80s, British street artist D*Face has painted walls all over the world with his incisive, Pop-inflected murals that critique the modern world, in particular consumerism and the American Dream. In past works he has appropriated familiar cartoon figures such as Mickey Mouse and Hello Kitty—dissecting them with images like skulls or economic signifiers—and created portraits of icons like Jimi Hendrix and Kurt Cobain.

His work can be seen across a variety of different media applying his playful, tongue-in-cheek imagery with anti establishment values, he was also one of fifty artists commissioned to create a 50th anniversary Penguin book cover and is the only urban artist to date to be featured on the front cover of the fine art publication Art Review. His work regularly sells at Christies, Sothebys and Bonhams auction houses and yet he still continues to put his work illegally into the public domain, and as such has extensively traveled the world showing and disseminating his artwork.

In 2005 D*Face set up the gallery ‘StolenSpace’, which continues to be London’s foremost contemporary urban art gallery. In 2010 he created the artwork for Christina Aguilera’s number one selling album ‘Bionic’, Christina has been a long time collector of D*Face’s work. 2011 marked a busy year for D*Face, between his two solo exhibitions in Los Angeles and Melbourne he found time to make a return visit to the Ridiculous Pool in San Bernardino, where he debuted a unique technique combining his love of skateboarding with live painting. The event was filmed and has since been featured on websites and TV shows around the globe, to date it has received 880,691 independent views on youtube, a figure that keeps climbing.